So now the Car drama is over and Yes I did get the wing mirror fixed and no I didn’t do it myself my better half did!!! Anyway it’s now time to get back to business. The writing business!! Now, amongst all my research for a good marketing strategy and preparation for the release of The Break there is one thing that keeps flashing up everywhere and that I keep blatantly ignoring and trying to avoid and that would be the crazy notion of The Book Trailer. I remember seeing a book trailer on TV for the first time and my first thought was ‘You’ve got to be kidding me, why?’ But on further reflection my second thought was ‘What an interesting concept why isn’t everyone doing it’ and I kind of came to the conclusion that it’s a little odd to present imagery to the reader before they’ve read the book. I mean I enjoy reading because it’s my interpretation of the story and each reader takes out of a story what they will, what’s personal to them and their view of what’s significant and their own imagery, surely by presenting them with images of your own perception is manipulating your reader before they’ve even read your work. It’s different to movie trailers and 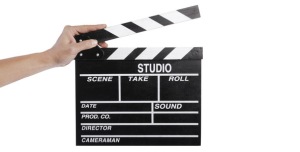 obviously movies as a whole for that matter because we’re viewing that Directors interpretation of the script and there’s hardly ever any room for personal interpretation.

I have to admit though the concept of Book Trailers intrigues me still so I had a Google and found a few people who’d shared their experience of making such a trailer, now naturally my first reaction to the idea was Oh My God do I need to start casting actors and getting them to act out scenes from the book? I now chuckle at the idea! And the answer is certainly not, I typed Book Trailers in to You Tube’s search bar and trawled through the many listed from the amateur to the professional and found not one single actor in sight, which is probably good news as I doubt  Johnny Depp would’ve been available!!!  Now one of my many passions as a kid/teenager/young adult was film making, my first real shot at this was when I made a promotional video for a local education centre which they used to send to primary schools to promote what they did, I was seventeen at the time and I was all about the cinematography, I was always so excited about everything but unfortunately a passion which died once financial responsibility started and I needed to pay the bills!!! So now, I’m thinking why not relight that little film makers spark hidden away and experiment with a Book Trailer, I still think the idea is crazy but I’m all for crazy it’s all part of the adventure after all!!!!